Homo Sapiens have evolved exponentially in every sphere of life, our race invented the solar panels to harness the solar energy, mobilized the old Graham Bell’s landline telephone to today’s latest mobile phones and i-pods, we burnt our brain cells to evolve the gliders into today’s sonic jet planes; but did we ever thought of the old rusted cycle on stand in the lawn. Certainly not, the design has been improvised a bit over the past decades but not evolutionary; now the students of NIT, Kurukshetra have come up with a revolutionary idea which can revolutionise the everyone’s life. The most prominent problems faced by the employers is the occupational hazards. Though these are many a times unpreventable, the extent of damage that these cause can be reduced by a significant amount. So the companies might involve the use of better work processes or provide better tools and equipments to the employees to improve the working environment. But these benefits are limited to only the upper class or the middle class of the workforce. The lower class is the most neglected as well as the most exploited part of the workforce and there is hardly any occasion when the organization thinks about their welfare and care. They are forced to work under improper conditions in return of low wages. Because of this, they suffer from a number of terminal illnesses which at times can be life threating. The situation becomes worse in a country like India where cheap labour is easily available. Many a times we have witnessed employees working in factories and industries under harsh and inhuman conditions, employing children in cracker factories is a common sight. The most important people in this category are those that we see daily, the sweepers cleaning the roads and streets outside our houses. The dirt and fumes of burning garbage that these workers inhale when they sweep the streets are indeed dangerous to their health. In fact, many of these sweepers suffer from diseases like asthma and bronchitis. Yet, these sweepers would not say a word since they would not want to give up their livelihood. We will attempt to help these sweepers by making their job simpler and their direct exposure to waste and garbage material minimum. Apart from this we shall also try to speed up the cleaning process which would save man hours thus achieving higher efficiency and effective work simultaneously. 2 Cycle is a kind of transport which comes at a very affordable price, and is possessed by about 82% of the Indian population. So both the merits and the demerit have a very visible effect in the society. Primarily, focusing on the sweeper section of our society, the whole idea has been drafted.

Our idea is to manufacture such kits or accessories which can be easily attached with a bicycle and which work in such a way that as the rider pedals on the cycle, the streets get swept. The accessory is what we plan to start manufacturing and selling and thereby begin a business. There are more than 9,000 sweepers currently working with the Municipal Corporation of Delhi (MCD). These workers if supplied with these accessories would not only work better but would also enjoy their work since this is a new technology, which will be introduced for the first time. By simply riding on the cycle the roads can be cleaned effectively without much health hazards to the worker. The accessory will be provided to these sweepers through their employers that is through the municipal corporation of the city. The benefit to the corporation in terms of saving of man hours is a factor that will encourage these corporations to purchase these accessories and supply to their workers while from the sweeper’s point of view as already mentioned it is quite useful from many perspectives. ‘Dhwans’ will be the name of our accessory and it will be produced under the company name Dhwans private limited. Our major focus initially will be to create a market for our product in the country and then expand to other countries if possible. We have a very detailed and planned marketing strategy to ensure our new concept and its benefits reach to the people so that they also make full use of the technology 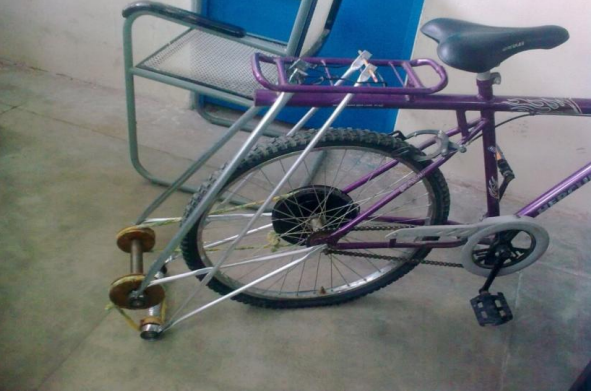 The frame designed and mounted by the team consists of aluminium pipes, the material has been chosen due to its ductile and malleable properties, and also it reduces the weight of Dhwans significantly. The pulleys are made of wood which have been turned on lathe machines in the workshop. All shafts were redesigned using wood as the base material which initially were of cast iron. We observed an increase in efficiency of Dhwans by implementing this light weight accessory. All these components have been mounted on the ordinary cycle.

The accessory that we plan to manufacture will be made as per the size of the standard cycle which is generally used by the sweepers. The top view as well as the side view of the cycle is shown in figure 1 and figure 2. Our basic design is to use the power of the rear wheel to finally drive the shaft which has the broom. This broom shaft with the brooms on it will clean the floor and the waste material will be collected in a bag designed for the same purpose. A pulley mounted on the rear wheel will have the same speed as the rear wheel. This pulley will act as our primary pulley. The material of this pulley will be teak wood considering it’s both light and hard. This pulley with the help of a belt will be connected to another pulley which would be mounted on the auxiliary shaft ( figure 2). The pulleys are appropriately grooved so that the belt can retain on the pulley. The material of this pulley would be the same as that of the earlier pulley but the size of this pulley would be smaller than the size of the pulley on the rear wheel. The size has been made such so as to increase the speed of the smaller rpm as 4 ω1 /ω2 = R2/ R1,since R2 is greater than R1 Hence, ω2 =ω1*(R1/R2)

Since the velocity of the belt is same on both the pulleys and as v=wr, the pulley having lesser radius will have more rotational speed. The auxiliary shaft is connected with the main frame of the cycle with the help of bearings mounted on the shaft. These bearings are made of high speed steel and have the initial diameter same as that of the shaft with slight tolerances for appropriate fitting on the shaft. These bearings support the shaft as well as connecting the main shaft to the cycle structure using aluminium rods which are part of the frame for the whole structure. This auxiliary shaft has another pulley mounted on it which with the help of a belt transfers power to the broom shaft. The pulley used here is again of the same wood material and the shaft which is being manufactured is also of wood. We have largely used wood as material for manufacturing the accessory since it’s cost is less as well as the weight is very less as compared to shafts made of steel. This will reduce the overall weight of the accessory and there will be less effort required from the sweeper there by making the task easier. The second pulley mounted on the shaft and the pulley mounted on the broom shaft will have different diameters as in the previous case. The diameter of the pulley on the auxiliary shaft will be greater than that of the pulley on the 5 broom shaft. This is done to further increase the speed of the shaft. sprocket pulley /ωpulley2 = Rpulley2 / Rsprocket pulley, (since Rsprocket pulley is greater than Rpulley2). Hence ωpulley2 =sprockets pulley*(Rsprocket pulley/Rpulley2)

A video that would make eyes glitter!

The belt used for connecting the two pulleys is a flat belt and its efficiency is around 90% which means a good amount of power can be transmitted by the belt without much lose. The broom shaft is the one which performs the task of sweeping. It is connected to the cycle with the help of a frame made of aluminium. It has two bearings which support the shaft as well as connect it to the cycle. There are suitable grooves cut into this shaft so that the broom can be attached with or placed inside the groove. By this arrangement, the dust or the waste will be swept off the roads by the broom as the broom shaft rotates due to the pedalling by the rider of the bicycle. The arrangement of the pulleys has been made such that the direction of rotation of the rear wheel and that of the broom shaft is opposite. Therefore, as the rear wheel will move in the clockwise direction, the broom shaft will move in the anti-clockwise direction. This facilitates the easier removal of garbage and an effective cleaning of the road.